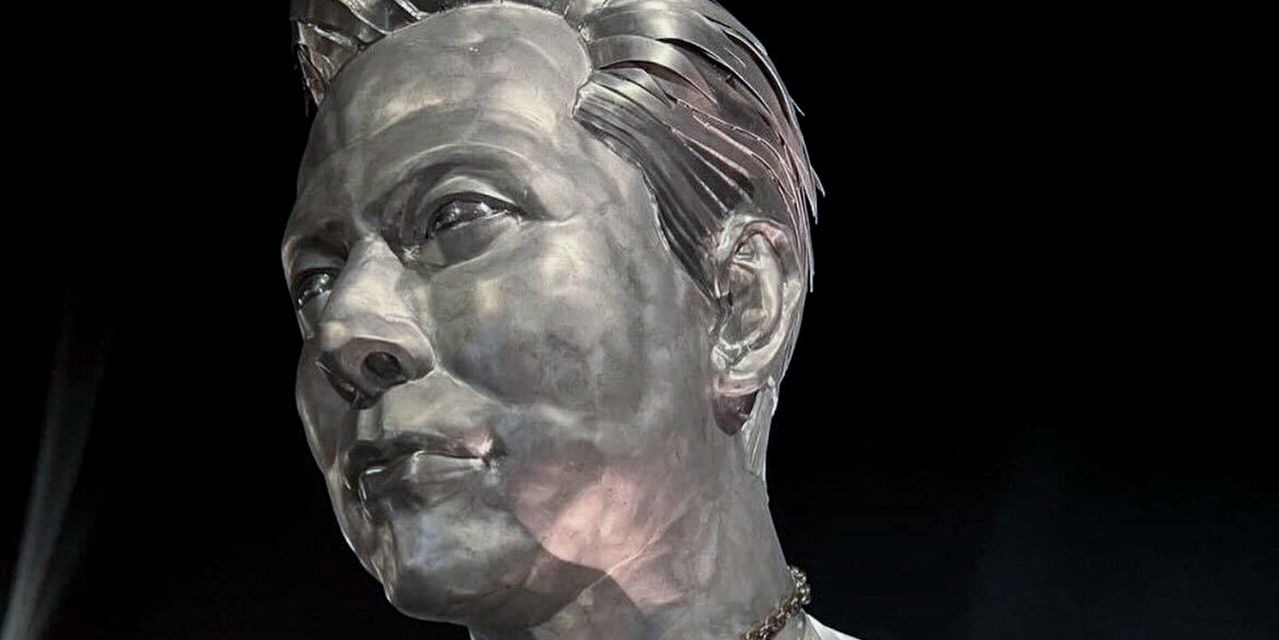 Kevin Stone got the call late last year: Could he make a statue of a giant goat with the head of

riding a rocket. Mr. Stone, a metal sculptor in British Columbia, Canada, assumed the stranger on the phone was Mr. Musk.

“I mean, who else would want something so crazy?” asked Mr. Stone, who typically gets hired to make metal dragons and eagles.

The request came from a couple of cryptocurrency entrepreneurs. The goal: to get Mr. Musk to tweet about the sculpture to his more than 118 million followers and draw attention to their cryptocurrency, the Elon GOAT.

What do you think of the Elon Musk goat sculpture? Join the conversation below.

“Elon tweeting us would legitimize the token,” said

It is the latest stunt in the cryptocurrency space, where jokes and memes about digital currencies regularly flood social media. But a 12,000-pound sculpture as a marketing gimmick isn’t so common.

The creators of Elon GOAT say the name of their cryptocurrency was inspired by how much they respect Mr. Musk. They and his other fans think he is the “greatest of all time,” or a “GOAT.” They took the admiration literally, spending $600,000 to create a sculpture of Mr. Musk’s head, wearing a gold-plated dogecoin necklace on a goat’s body. The rocket can move, pointing to the sky as if it is taking off. Gas lines run through it so that flames can shoot out of the back.

On Saturday, the sculpture is being driven to

headquarters in Austin, Texas, in the hope that Mr. Musk will come out and accept it as a gift. The creators are calling the event “GOATSgiving.”

Tesla didn’t respond to a request for comment. Mr. Musk hasn’t acknowledged his four-legged likeness or reached out to the token’s founders.

One of them, Mr. Sansalone, said he works on the token full time and previously ran a construction company and traded energy. Unlike bitcoin, ether or dogecoin, the Elon GOAT token is far from a household cryptocurrency name. It is ranked well outside the largest cryptocurrencies by market value, according to CoinMarketCap.

The idea of the sculpture came together last year. “It was an evening joke that kind of just came to fruition,” said Mr. Sansalone, 40 years old.

Mr. Musk’s head was made by Mr. Stone, which took nearly six months to complete. The goat body and rocket were made by others in Phoenix to speed up the project, Mr. Sansalone said. Then all the pieces were put together and attached to the back of a 70-foot long semi-truck trailer.

“When I first saw the statue my jaw dropped,” said DeMarco Hill, 51, who spotted it in September in Goodyear, Ariz., where he lives. He grabbed his 12-year-old son and they followed it. “It was something you’ve never seen before in your life.”

Mr. Hill, a trucker who owns his own company, Stay Ready Trucking, thought the stunt was so entertaining that he found Mr. Sansalone and asked if he could participate. Mr. Sansalone said Mr. Hill was needed because only someone with a special license could drive around the heaping pile of metal.

He has since driven the sculpture through California, Arizona and Washington, before bringing it to Texas. People who drive by honk their horns or give a thumbs-up, Mr. Hill said.

“If I pull up to the side of the road it’s like people crowding around,” he said. “It gets crazy.”

Denise McKinney was buying lunch last month from a taco truck on Sunset Boulevard in Los Angeles when she saw it drive by.

“My first thought was like, ‘What the hell is this?’” said the 43-year-old author.

Then she recognized the face. “Ugh,” she said she thought to herself, “of course it has Elon Musk on it.”

Mr. Sansalone said the sculpture has mostly gotten a positive response. He hasn’t heard anyone mistaken Mr. Musk’s face for someone else. “I would say he is probably the most relevant person on the planet right now,” Mr. Sansalone said about Mr. Musk, the world’s richest person who recently bought Twitter Inc. for $44 billion.

In September, the sculpture sat in front of Tesla’s office in Palo Alto, Calif., during the company’s artificial-intelligence conference. Tesla employees crossed the street to take pictures with the sculpture, Mr. Sansalone said. Mr. Musk was at the conference, according to Twitter posts he made, and Mr. Sansalone assumes the billionaire saw the sculpture.

“All there was to look at was a lit-up rocket erected in the middle of the street,” he said.

For the past month, Elon GOAT has been promoting the Saturday event and tweeting at Mr. Musk, hoping it will give him enough time to get to Austin, Mr. Sansalone said. They were encouraged when a flight-tracking service showed Mr. Musk’s jet heading to Austin on Wednesday.

They plan to deliver the sculpture to Tesla’s headquarters on Saturday afternoon. The hope is that Mr. Musk will come out and accept it.

If Mr. Musk doesn’t, Mr. Sansalone said he has only one plan.

This season’s push to shop local

This season’s push to shop local

From Kidney Donation to Tableau Dashboard